The problem with selling the semantic web stems from its academic background.

If you're hacking the semantic web together, you are:


To do any of these things, you need to be smart, plucky and grok lots of acronyms.

The trouble is, none of those things listed above is a "web designer", or "web developer".
If there's much connection between "web developer" and any of the above, it tends to be more of the "I'm an elite specialist who dabbles in web development".

What does that all have to do with selling the semantic web?
It means that most of us don't make good diggbait.

Here's an experiment:
Use google to find a tutorial on implementing small parts of the semantic web, suitable for someone who knows a little PHP or RoR.

My 8 second web 2.0 mind can't comprehend half of the results, so I end up moving onto stuff like "Man is eaten by Bear/New AJAX Library/Ron Paul".

Think back: how did you get sold on the semantic web? For me, I read some early writing by timbl.

I was sold on a scenario: what if your email client could book you in at the hair dresser in a town you've never visited. The semantic web helps you do this (or similar).

But since that time, I've barely even played with SPARQL enough to know it fluently.

What's going on? How did this come to be?
... and the only thing I can think of is; I never hit a landing page like this. at least, until I started playing with GRDDL: 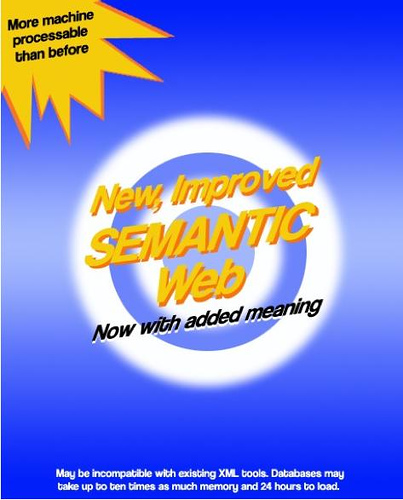 You make valid points about the Virtuoso Universal page not providing a simple path.

But do note, I tried to make the Semantic Web even simpler to grok via URIs produced by the OpenLink Data Spaces platform.

My belief is that the Linked Data Web (foundation of Semantic Web vision) is an adjunct to the existing Document Web. Thus, I've tried to expose the adjunct unobtrusively. For instance, if you look at my profile page, you will notice a "Linked Data" tab which then exposes the Linked Data features without a brain twisting dislocation.

Bad luck, you tried to reach my blog post during hosting problems. That's ok now so you'll have to find another victim.

BTW, if you want practical SW tools and setup your triple store in 5 minutes, why not have a look at ARC2 ? Also, consider the W3C SW FAQ for questions about the SW.

@ Alex, yup! I'm thrilled with ARC2 (it's what started me down the GRDDL path).

The W3C pages are good, but don't seem to come up via google much.

@kingsley - that's great stuff. In light of Yahoo's recent announcements, I think that kind of thing will go a long, long way to selling the semweb.